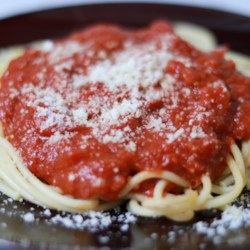 If you’ve never heard of it, don’t worry – until about two months ago, neither had I. Then, suddenly, cacio e pepe was everywhere, virtually speaking at least, a million slick strands of cheesy spaghetti clogging up social media like a vast hipster hairball.

Those who claim a longer familiarity with the idea probably have some connection with Rome, where it’s an old favourite – its simplicity means that it’s rarely found in restaurants abroad, at least until recently. Then, suddenly, the once humble primi launched its quest for world domination – it pops up as the eternal city’s “trendiest pasta dish” in 2012, and by the beginning of this year, Time Out was already declaring it New York’s “trendiest dish of 2016”.

“This recipe was brought back from Italy by my husband’s grandfather. It is a family favorite! For sauce with meatballs, shape 6 pounds ground beef into balls. After sauce has simmered, place meatballs in sauce and simmer for additional 4 to 5 hours. Stir occasionally.”